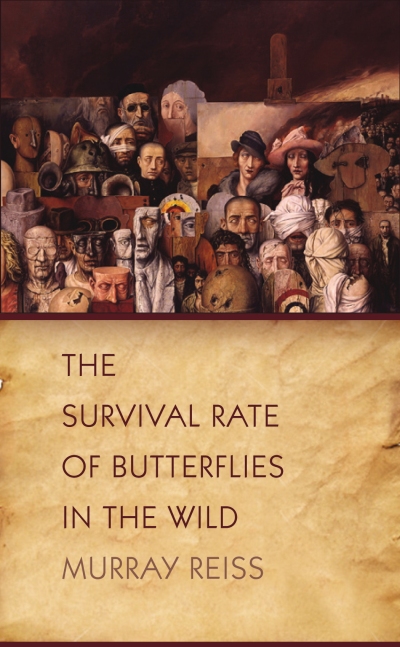 The Survival Rate of Butterflies in the Wild reclaims a childhood haunted not only by the Holocaust—in which the poet’s father’s entire family perished—but by his father’s subsequent, desolate silence and shame for having survived.

Elliptical and allusive, veined with dark humour, often surreal, proceeding by fits and starts, feints and misdirections, these poems illumine some of history’s darkest shadows with a searching, redemptive light that shows the fearful price paid when history’s traumas are passed down from one generation to the next in secrecy and silence.

Copies can be ordered from your local bookstore (here’s hoping you’re fortunate enough to have one) or Chapters Indigo.

A powerful, moving book with poems that are poignant, accurate, written in deep ancestral memory, and in figurative language that is sometimes delicate and always accomplished. By focusing on the story of his relationship with his father, Reiss suggests how personal experience is inextricably connected to various contexts that form and transform our lives. A reader’s emotional engagement and the poet’s craft is sustained throughout, and no matter how passionate, the poems never collapse into mere emotion.

I’m stunned with the magnificence of the poetry in The Survival Rate of Butterflies in the Wild by Murray Reiss. He has found a way to look at an age-old subject in a startling new way. His images, his images! Reiss’s control of the form including a craftsmen-like skill with the line structure, his lack of sentimentality, the depth of feeling, I could go on and on. “My Grandmother’s Hair”—what Reiss accomplishes in such a few lines. This is a heartbreakingly beautiful book of poems.

In this astonishing book, Murray Reiss casts off the terrible weight of history and finds the necessary truths crushed beneath. In the masterful title poem he interweaves the harrowing connections between the scarce survival rates of butterflies to that of Jewish children in Poland during the war. Each poem’s frank accuracy reveals the marrow of that ghostly century and all its madness dreamed in blood.

His family’s story in Poland during World War Two exposes hate’s cruel accuracy. Whether he confronts how bones and ash from death camps nourished bumper crops or how a grandmother’s sewing machine allowed her to be spared, or how a mother and father manage, against all odds, to survive every brutal storm thrust upon them, he never flinches in his mission.

This is a shocking but compassionate book that finds the good in it all too. His poems do not spare the truth but force us closer to its exposing light. To look away would be to forsake all those who fought to get us safely here.

These poems take the reader deep down into the psyche of a man struggling to understand the purpose of his burdensome, yet essential inheritance. Like the wild butterflies of the title, wisdom and heartbreak flutter through these pages contained in delicate language both fragile and beautiful. A collection that heals as it transforms and soars into the light.”

Murray Reiss has found a way in this remarkable new book of verse to meet the challenge of finding words for the unspeakable. The Survival Rate of Butterflies in the Wild is full of the paradoxical horrors of feeling too much and feeling nothing at all, rich with tightly disciplined lines that come as close as language can to addressing what may be humankind’s most appalling demonstration of just how far we can go into the darkness, and does it all without rhetoric or sentiment.
Readers who are willing to brave the tough terrain that Murray Reiss has mapped out will be rewarded, not with facile prettiness or empty hope, but with something far more rare and valuable — seasoned, mature hope in the face of nearly unbearable knowledge.
Reiss has done us all a great favour with this courageous text.
—Tom Sandborn, Vancouver Sun

The burden that is surrendered here is not merely personal, though if it were, that would be accomplishment enough. For Reiss performs here a shamanic and historical function, and brings us a gift from the dark underworld, which is a large part of why this reader finds himself so engaged.

Each poem, in and of itself, is virtually pitch perfect and each deserves quoting at length. But what captivates and enchants is the cohesion of the work, the book functioning as a whole, with each poem mirroring, resonating, and vibrating with the others.

As our century bears down upon us with ever greater invitations to fear and terror, ever stronger motivation to just numb oneself and disappear into mere surfaces of being, the book suggests an alternative response. Rather than numbing out the terror resident in the Holocaust and in the blizzard of other previous and ongoing genocides and ecocides, we can choose to be present to the dead, not only as their witnesses, but as their promise.

Murray Reiss has given us a luminous book.